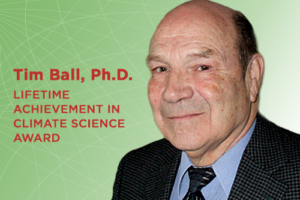 2019 Winner of the Lifetime Achievement in Climate Science

Dr. Timothy Ball is a renowned environmental consultant and former climatology professor at the University of Winnipeg, Manitoba, Canada.

Ball is also Chief Science Advisor of the International Climate Science Coalition an a Policy Advisor to The Heartland Institute. With a doctorate in climatology from the University of London, Queen Mary College, England, Dr. Ball’s comprehensive background in the field includes a strong focus on the reconstruction of past climates and the impact of climate change on human history and the human condition.

Dr. Ball is a researcher/author of scientific papers on a range of environmental issues. He has co-authored a paper for the scientific journal, Ecological Complexity, with Baliunas, Dyck, Soon, Baydack, Legates, and Hancock titled “Polar bears of western Hudson Bay and climate change: Are warming spring air temperatures the ‘ultimate’ survival control factor?” He is also co-author of the book Eighteenth Century Naturalists of Hudson Bay (2004 – McGill/Queens University Press) with Dr. Stuart Houston, one of the world’s leading authorities on arctic birds.

Dr. Ball is a leader in the current global warming debate and appears regularly as a guest on radio and television. Dr. Ball is also published frequently in leading newspapers and magazines across Canada and, increasingly, the U.S. and abroad. A measure of Dr. Ball’s impact was seen recently when, after one of his pieces was featured on the Drudge Report, a leading on-line news service (click here to see original piece), he received approximately 1,000 e-mails from the general public during the next 24 hours, 90% of which were supportive. Dr. Ball personally responded to over 500 of these, providing respondents with information as requested.

The Heartland Institute is a national nonprofit research and education organization based in Chicago. Founded in 1984, it is tax exempt under Section 501(c)3 of the Internal Revenue Code. It is not affiliated with any political party, business, or foundation. The mission of The Heartland Institute is to discover, develop, and promote free-market solutions to social and economic problems.